In the News
TRAINING DAYS 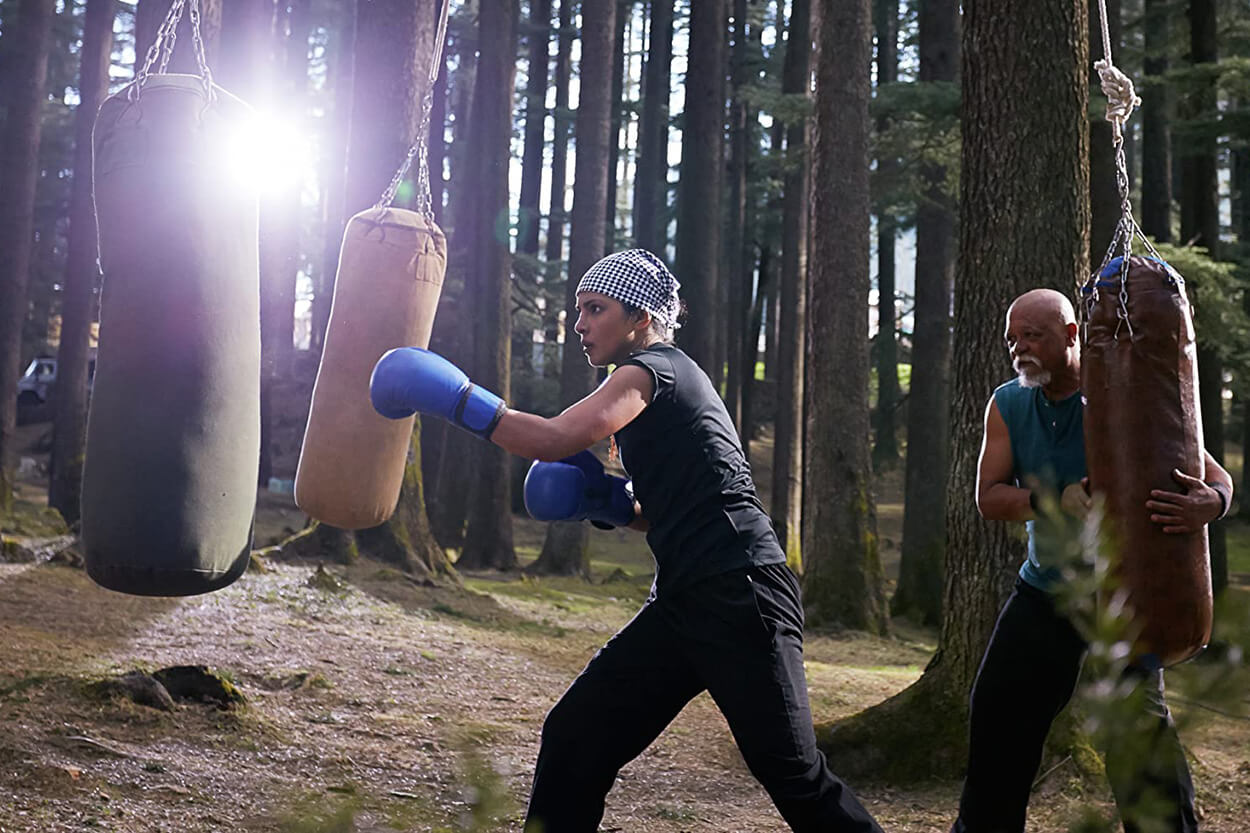 Bollywood has begun to make films that get the mechanics of sport right. This is largely due to the contributions of sports consultants like Robert Miller, who have helped bring authenticity to films such as Bhaag Milkha Bhaag and Mary Kom.

A sportsman's life is quite dramatic. He's an oppressor, he's the oppressed; there are people out to get him, he has the world's support; there are tests he cannot afford to fail, a constant demand to prove himself and beat the odds; he's no stranger to liberating highs, or to crushing lows. And when the winning streak comes, when he puts the spotlight on his countrymen through his achievements, when he begins to represent something larger than himself, he becomes a symbol of national hope and a hero is born.

It's not surprising that some Bollywood filmmakers have sought inspiration in the lives of these real-life heroes, and adapted their stories for the screen. Sports biopics have become especially popular in the last decade. We've had Chak De! India (2007), Paan Singh Tomar (2011), Bhaag Milkha Bhaag (2013) and Mary Kom (2014), all of which have been well received. Before Chak De! India, sports biopics weren't prominent at Bollywood's box office. Over the course of the last three decades, one can easily count the number of sports films that have come out of Bollywood: the notable ones — Hip Hip Hurray (1984, football), Jo Jeeta Wohi Sikandar (1992, cycling), Lagaan (2001, cricket), Iqbal (2005, cricket) — are outnumbered by the forgettable, obscure ones — Awwal Number (1991, cricket), Ehsaas (2001, athletics), Stumped (2003, cricket), Rok Sako To Rok Lo (2004, athletics), Hattrick (2007, cricket), Say Salaam India (2007, cricket), Apne (2007, boxing). However, Chak De! India was different for two reasons: unlike the aforementioned films, it drew elements from real-life incidents (Shah Rukh Khan's character, Kabir Khan, was inspired by real players and national team coaches), and brought on board a specialist hitherto unknown to Bollywood: a sports consultant.

In 2006, while the director Shimit Amin was busy with Chak De! India's pre-production, he called on Robert Miller in the United States. It had been just over five years since Miller had floated ReelSports, a sports entertainment company based out of Santa Monica (California) that specialised in staging sports sequences for films. Amin had been impressed by the 2004 American docudrama Miracle (a film based on the United States' men's hockey team that won the gold medal in the 1980 Moscow Olympics), where Miller's team had choreographed the hockey sequences and coached the actors. Amin wanted the same authenticity in his own film, and asked if Miller would work on Chak De! India's hockey sequences. At the time, Miller didn't take that half-hour phone conversation seriously. He was used to receiving a lot of random calls like this and Amin wasn't the most well-known name outside of India at the time. But that phone call wasn't from a fledgling filmmaker; the film was being backed by Yash Raj Films, one of the biggest movie studios in the country, featuring one of the most bankable stars in Bollywood, Shah Rukh Khan. Miller was soon signed on for Chak De! India.

A year later, the film released to both critical acclaim and box-office riches. Chak De! India was a conventional Bollywood mainstream film (the film's formulaic tropes were quite apparent: the Hindu-Muslim tension; the redemption of the film's only lead; the hockey team as a symbol for national integration), but a major part of its charm lay in the well-shot, slick and kinetic hockey sequences, and the clever segueing of the game's nuances into the film's story. Chak De! India understood that in a sports film, some of the most searing moments of tension spring from the mechanics of the game. In these films, we connect with actors both as people and sportsmen, empathising with and rooting for them. Miller may not have realised it then, but Chak De! India is the reason he's the most sought-after man for any sports-related film today. He has since consulted on a spate of big budget Bollywood films, including Thoda Pyaar Thoda Magic, Dil Bole Hadippa, Patiala House, Student of the Year, and most recently, Bhaag Milkha Bhaag and Mary Kom. Looking back, Miller still believes that Chak De! India was ReelSports' most demanding project. "It was my first Bollywood film at the time, and I wasn't sure if it would actually end up on screen," says Miller. "Also, I was working with so many young people learning to become both hockey players and actors."

Certainly, the biggest challenge in any sports films revolves around making actors look like assured sportsmen. For the acting performances in these films to be credible, the relationship between an actor and a filmmaker has to accommodate a bunch of specific people: a physiotherapist, a trainer, and the coach. "We establish a coach-athlete relationship with the actors in order to begin specific sports training, and discuss what is going to be required from them athletically," says Miller. Actors portray their roles not only through dialogues, but also via silences, gestures, mannerisms; in short, by their very sense of being. But the roles of sportsmen have an additional set of requirements: the actors not only need to work on building a particular kind of body, but also need to give the appearance of being able to play the sport convincingly. This emphasis on realism, however, can also be a double-edged sword that throws up several difficult questions: at what point does the sportsman slink away and let the actor take over? Or can both co-exist simultaneously? How should the "reel" be designed so that it effectively mimics the "real"?

Constantin Stanislavski, a Russian actor and theatre director, drew attention to the delicate interplay between the physiological and psychological aspects of acting in his seminal book An Actor Prepares. At one point in the book, the director Tortsov instructs a bunch of actors to lift a particularly heavy piano and, while they are at it, asks them the following: "Multiply quickly 37 X 9. You can't do it? Well, then, use your visual memory to recall all the stores along the street from the corner to the theater... can't do that either? Then sing me the Cavatina from Faust. No luck?" He continues: "In order to answer my questions you had to let down the weight, relax your muscles, and only then could you devote yourself to the operation of your five senses. Doesn't this prove that muscular tautness interferes with inner emotional experience?" One may argue that lifting an unwieldy object is completely different from playing a sport on screen. Yet, at a fundamental level, they're similar because they both stem from unfamiliarity — they're physically demanding, and throw the actor into an alien realm. Recalling the ninth multiplier of 37 while lifting a massive piano can indeed be more or less as challenging as an actor (who is unfamiliar with the sport he's "playing") being able to react like a professional boxer, for instance, when he's being punched by an opponent.

However, Miller, who's a trained sportsman (he's been a Strength and Conditioning coach at Georgia Tech, and worked with the Atlanta Olympic Committee and NBC's Sydney Olympic coverage), understands how human bodies react to new gruelling physical regimes, and relies on a tested learning technique to help his actors live their parts. "If the actor can rely on muscle memory [a form of procedural memory that helps one get better at something by practice] to perform in the arena or field of play, and feel confident athletically," explains Miller. "He or she can more easily concentrate on delivering an amazing acting performance."

These nuances of acting become especially paramount in melodramatic Bollywood biopics that want to be heart-tugging, inspirational stories (even at the cost of distorting or eschewing the complexities of several real-life incidents) of iconic sportsmen, without compromising on the veracity of on-screen action. This means that these films are looking at "realism" through a lens that suits their convenience. In fact, Prasoon Joshi, screenwriter and lyricist of Bhaag Milkha Bhaag, went on record to say, "It was not meant to be a 'documentary' or a 'niche' film." This lopsided version of what's "real" also finds its way into how sports sequences are shot in these films. For instance, Farhan Akhtar competed with professional athletes in Bhaag Milkha Bhaag; similarly, Priyanka Chopra fought against professional boxers in Mary Kom. "We took real boxers because actors playing boxers would not have looked genuine, and we would have had to teach them boxing too," Mary Kom's director, Omung Kumar, said in an interview to the newspaper India West. Miller seems aware of the inherent contradiction of these films. "We teach the actors to perform particular skills that will be required in the film, and when possible, we try to design the action to match the actor's natural strengths," he says. "In Mary Kom, the real boxer is very quick and a bit unorthodox in her style. As a taller boxer, Priyanka sometimes looked better throwing different combinations, straighter punches. For instance, a straight left instead of a hook or uppercut."

At other times, Miller and the filmmaker's team turn to elements of cinema for creating an illusion of reality. "We stress to the actors and athletes the need to perform the choreographed action to the best of their ability and let us use the cameras to enhance the action," says Miller. In Chak De! India, Miller's team used a lot of "counter camera movements to give more energy and speed to the plays". Similarly, in Bhaag Milkha Bhaag, the actors always knew were the cameras were placed, and Akhtar was told to come out of the blocks low and explosively. "In some cases, we may also employ tricks of the stunt trade to help sell a punch or hit. There are often certain camera angles where a hit or a punch looks a little more dramatic. In Mary Kom, Priyanka was already well-versed with snapping her head just a little bit extra to sell a punch and make it look a little more powerful."

Bollywood, like any other money-minting industry, always has a keen eye on successful trends. Sports films have typically performed well at the box office in the past few years. It's still a little early to say whether they have genuinely become a trend in Bollywood, but as Indian sportsmen continue to shine at different global platforms, filmmakers will keep bringing their stories to the screen. For instance, a biopic on MS Dhoni, starring Sushant Singh Rajput, is already in the works; Mahesh Bhatt is reportedly working on a biopic on Saina Nehwal, who wants Deepika Padukone to play her in the film. We've seen these sportsmen on our television screens, and know that no film on Dhoni or Nehwal can be complete without Dhoni's trademark helicopter shot, or Nehwal's crosscourt smash. They won't be the easiest things to replicate on screen, but with folk like Robert Miller working relentlessly behind the scenes, losing sleep over camera set-ups, pushing actors to go beyond their limitations, and constantly using art to recreate life, one hopes that upcoming Bollywood sports films will skilfully honour the real, rather than looking away from it.

This article was first published in The Sunday Guardian (11 October 2014).
Original story