In the News
10 REASONS WHY CHAK DE! INDIA IS A SPECIAL FILM 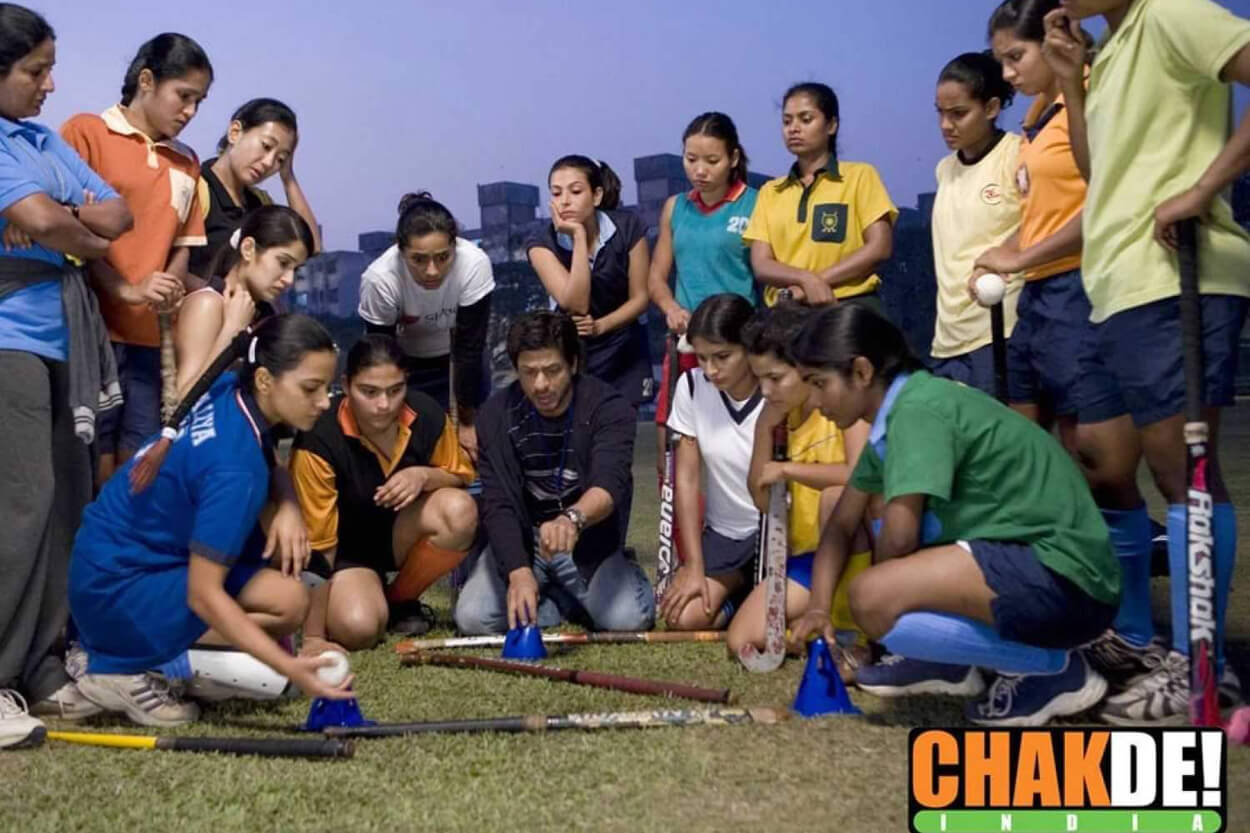 As the sports drama starring Shah Rukh Khan completes 10 years today (10 August), we look at what makes it one of the more memorable films of the past decade.

Chak De! India, which starred Shah Rukh Khan and was released on 10 August 2007, wasn’t just a big Yash Raj Films hit, but also one of Hindi cinema's early and most successful sports films.

From the perfect casting of 16 new actresses to sending out a message on unity, Chak De! India got many things right. Directed by Shimit Amin, the film that won the National award for Best Popular Film Providing Wholesome Entertainment that year, is definitely special. Here are 10 reasons why.

This was the first time we saw Khan sport a thick stubble on the big screen. Obviously, it had the girls swooning over him. Though he looked charming, it was also a rare occasion when Khan played a sports coach training a national team instead of the usual romantic hero.

Khan was convincing as the fallen hero who misses a crucial goal leading to a major defeat in a match against Pakistan, and eventually redeems his honour by coaching the women’s national hockey team. He had several powerful lines of dialogue that he delivered in his own inimitable style. He played the role with great intensity and sensitivity, making it one of his best performances.

Not too many sports films had been popular before 2007, let alone films about women in sports. There was no guarantee that the audience was ready for a film like this. But Chak De! India showed that there is a market for well-crafted sports biopics and dramas and was followed by films like Paan Singh Tomar (2012), Bhaag Milkha Bhaag (2013), Mary Kom (2014) and MS Dhoni: The Untold Story (2016).

Yash Raj Films backed writer Jaideep Sahni and Amin in telling this compelling story about female strength and camaraderie through a technically sound film with brilliantly shot sports sequences. Audiences were so taken in by the film that they cheered for the on-screen team like they would in a sports stadium at an actual match.

Casting the 16 girls to play professional hockey players was a long and tedious process. But Amin should get a pat on the back for getting most of his casting right and extracting some very good performances from the girls. Chitrashi Rawat, who was picked because she was a hockey player, was a casting coup, as she won audiences over with her spunky and fiery portrayal of her character, Komal Chautala.

Shilpa Shukla, who had earlier played a supporting role in Hazaron Khwaishein Aisi (2005), scored her first major role as the experienced but rebellious player of the team, Bindia Naik. She made a huge impression with her mature performance. Vidya Malvade, Sagarika Ghatge and the rest did a great job too.

Their chemistry with each other made for some really entertaining scenes. Not only were they a formidable unit on screen, 'the Chak De! girls', as they came to be known, even won a Screen award for Best Supporting Actress together.

4) Professional training for the cast

The producers hired ReelSports to put together a team of hockey coaches, led by former India goalkeeper Mir Ranjan Negi, to conduct a rigorous four-month training camp. At the camp (where the cast had to wake up at 4 am and go to bed at 11 pm), the girls learned the rules of the game, took acting lessons, and followed a strict diet. The training involved professional coaching, including learning how to hold the hockey stick and manoeuvre the ball without coming across as fake on screen. Those who were originally players, like Chitrashi Rawat, Sandia Furtado, and Raynia Mascarenhas, were trained in acting.

Several rehearsals and script readings were also held with all the artistes, including Khan, before the shooting began. The girls had to go all method as they weren’t allowed to do their nails or eyebrows and stayed in character throughout the filming.

International stunt and sports director Rob Miller was roped in as action director on the film. Miller became a crucial part of the training with the girls as he worked alongside Negi to help them perfect their moves. He also rehearsed the match scenes with them so that they were prepared on the day of the shoot. He choreographed and directed the sports sequences so well that you would feel like you were watching a live match, with some drama thrown in, of course.

Miller did a brilliant job of making the scenes look authentic, technically sound, engaging and exhilarating. He later went on to work on several Indian sports films like Mary Kom, and Bhaag Milkha Bhaag.

The title song ‘Chak De! India’ turned into a sports anthem after the film’s release. Composed by Salim-Sulaiman, the song was used by TV channels and cricket fans extensively during the inaugural T20 World Cup, won by India, that year. Later, the song was played at numerous sports events, including the 2011 Cricket World Cup, which the Indian team went on to win. Another song from the film, 'Maula Mere', was also loved, as it set the emotional tone of the film.

The screenplay of the film was spot on as it gave us some very interesting scenes that explored the relationships of the players with one another and with the coach. Apart from the actual intensity of the hockey game unfolding on screen, the tension between the players and their attempts to outdo each other was very engaging.

One of the most intense moments of the game comes before the final match, when Khan mouths the now famous 'sattar-minute monologue' for his team. When the girls actually go out and play, the audience is completely invested in their victory, thanks to the precursor.

There are also tons of simple, touching moments like when Bindia calls the caretaker of the practise grounds, Sukhlal, who tells her, “World Cup jeetke aao betaji. Dal chawal zindagi bhar khilaonga aapko. Haarna nahin hai [Win the World Cup, child, and I'll feed you my entire life. Do not lose]." To this Bindia replies, “Mar ke ayenge magar haar ke nahin [We will die but not lose]."

You know from the beginning that the team will win in the end, but the ride is made enjoyable by such intense and touching moments.

Previously a writer of films like Khosla Ka Ghosla! (2006) and Company (2002), Jaideep Sahni wrote some memorable dialogues for Chak De! India, and many of them were very patriotic too.

In one of the scenes in the movie, Shah Rukh’s character Kabir Khan says, “I am the coach of the Indian national women’s team. Mujhe states ke naam na sunayi dete hain na dikhayi dete hain. Sirf ek mulk ka naam sunayi deta hai — India! [I don't hear or see the names of the states. I can only hear one nation — India]."

And, of course, there is the iconic monologue, where he says the memorable lines: “Sattar minute hain tumhare paas. Shayad tumhari zindagi ke sabse khaas sattar minute [You have 70 minutes — perhaps the most crucial 70 minutes of your life]."

In another scene, when the team loses a match because of the players not playing as a team, coach Khan says, “Tumhe mujhse takleef nahin hai. Tumhe takleef iss baat se hai ki maine tumhe ek doosre ke badle nahin, ek doosre ke saath khelne ke liye majboor kiya. Khud se pehle apne team ke baare me sochne ke liye majboor kiya. [Your problem is not with me. Your problem is that instead of playing against one another, I asked you to play with one another. That I am asking you to think about the team and not yourselves.]"

At heart, Chake De! India talks about destroying the various internal divisions and being united as a country. Instead of fighting amongst ourselves, if we came together, we could do much better.

Chak De! India is especially important because it came at a time when India was at the cusp of embracing sports culture. It was a time when the Indian cricket team was going through a transformation under MS Dhoni (and won the T20 World Cup in 2011) while sportswomen like Sania Mirza and Mary Kom were making a mark.

In the 10 years since the release of this film, India has moved on to have pro leagues in games like kabaddi, football, hockey, boxing, MMA, badminton and other sports which were ignored by viewers for decades. Also, players like Saina Nehwal, PV Sindhu, pro boxer Vijender Singh and several others have risen to the top and made their marks internationally.

This shift in culture perhaps has seen a spurt in the stories of various sports personalities being adapted to the big screen — from Mary Kom, Paan Singh Tomar and Milkha Singh to Mohammed Azharuddin and MS Dhoni. Now films on the lives of Nehwal and Sindhu are in the making. Chak De! India was the film that cleared the way for these and showed that sports films could be a good business proposition too.

This article was first published in Cinestaan (10 August 2017).
Original story